On April 11, 2019, the Scala Santa (Holy Stairs) were opened to the public without the wooden covering that had been in place for some 300 years. The Scala Santa are believed to be the stairs Our Lord climbed in order to be brought before Pontius Pilate for trial on that first Good Friday. The stairs were identified by St. Helena during her visit to the Holy Land and, along with the true Cross, brought to Rome by her son, the emperor Constantine the Great. The stairs were later installed in the Basilica of St. John Lateran (the cathedral church of the diocese of Rome) and instantly became a special place of veneration. Traditionally, pilgrims would ascend the stairs on their knees in an act of penance and adoration.

The stairs are composed of various types of marble and have small crosses carved in various places to mark the spots where drops of Our Lord’s Blood fell as He descended the stairs on His way to Calvary following His scourging and crowning with thorns. Over the centuries, the marble of the stairs began to wear away due to the sheer number of pilgrims making the ascent. In 1723, Pope Innocent XIII ordered that the stairs be covered with wooden planks so as to preserve them from further wearing away.

A private philanthropic organization, Patrons of the Arts in the Vatican Museums initiated the project to restore the stairs and the 16th century frescos surrounding the stairs. The organization also funded the restoration, carried out by experts from Vatican Museums. When the wooden planks began to be removed, restorers found numerous notes and coins tucked into the spaces between the planking left by pilgrims over the past 300 years. Paolo Violini, the director of the restoration project stated, “The steps are made of many different kinds of marble and cleaning them revealed their beauty.”

The Scala Santa remained uncovered until June 9, 2019 when they were once again covered with wooden planks to preserve the integrity of the marble. 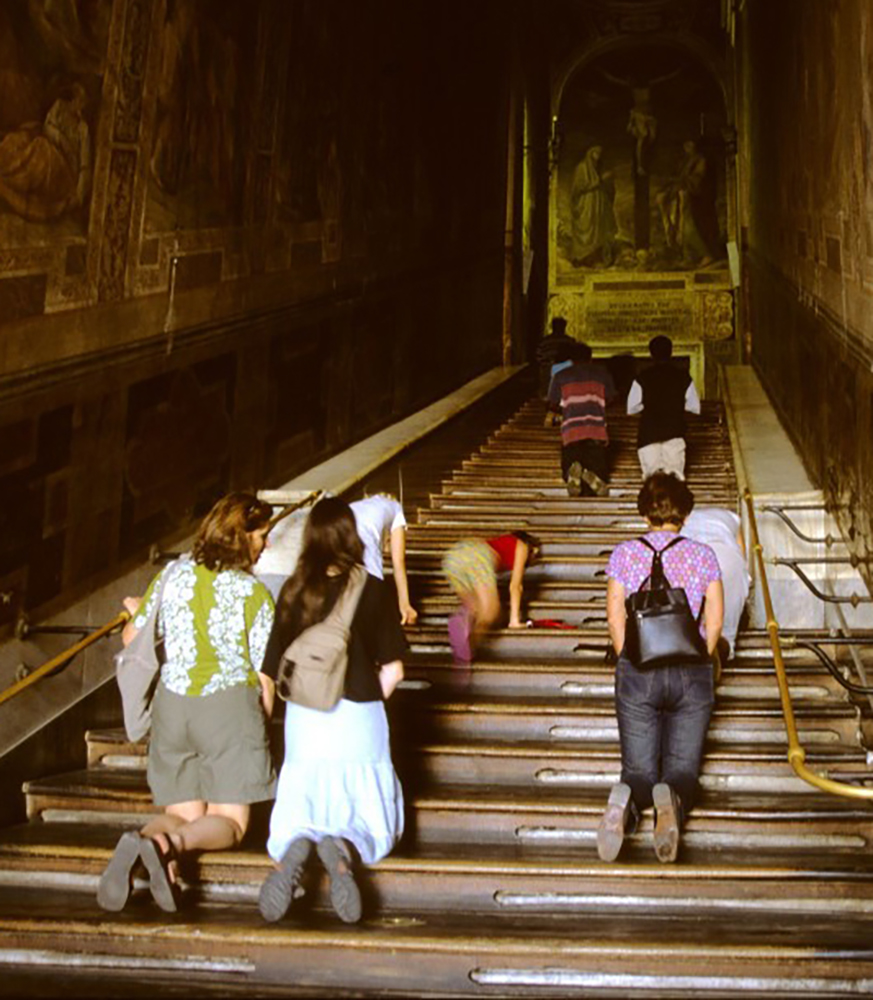 The Scala Santa before the 2019 restoration. 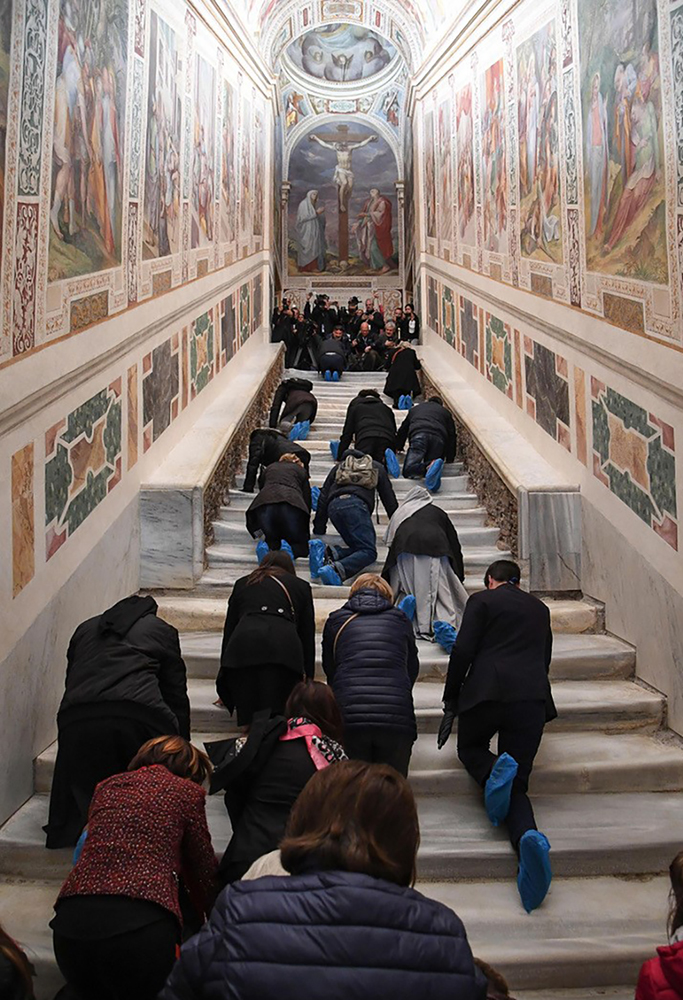 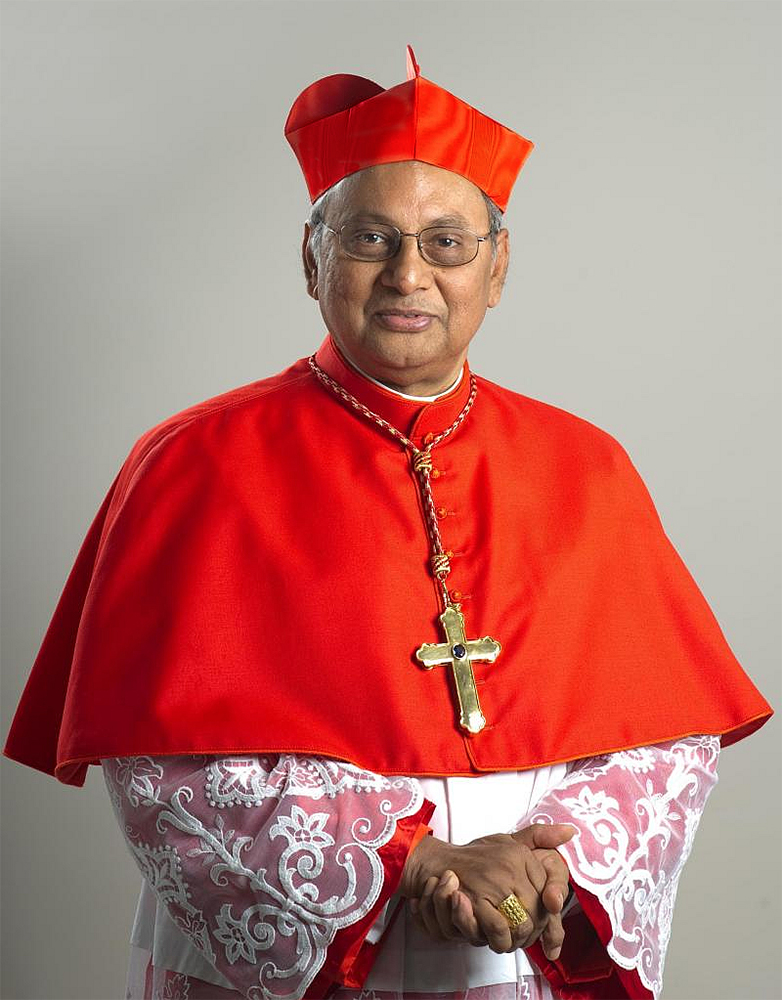 The Easter Sunday suicide bombings by Muslim terrorists killed an estimated 320 Catholic faithful who were gathered for Holy Mass in various churches in Sri Lanka. A concern that the lack of police and military security would lead to additional loss of life of Catholic Christians prompted Malcolm Cardinal Ranjith, Archbishop of Colombo, Sri Lanka, to order that no public Masses be offered on Low Sunday (28 April). He then announced that public Masses would resume on Sunday May 5, after noting that security had improved somewhat. His Eminence stated: “But we will start with a smaller number of Masses and see if we can slowly increase it depending on how the situation develops.” When offered a bullet proof limousine, he categorically refused indicating that he would trust in divine protection.

The Cardinal also issued a veiled warning to the Sri Lankan government when he stated: “All the security forces should be involved and function as if on war footing…I want to state that we may not be able to keep people under control in the absence of a stronger security program…We can’t forever give them false promises and keep them calm. Additional security is necessary, [Ranjith said, so] the people don’t take the law into their own hands.”

By making these statements, Cardinal Ranjith seems to be repeating the very effective strategy employed by New York Archbishop John Hughes when New York churches were under threat of attack by the anti-Catholic “Know Nothing Party” in the 1840s. Hughes famously told New York mayor James Harper that if any Catholic church was burned in New York, the city would become “a second Moscow” (Moscow was destroyed by fire in 1812). Hughes was also urged by some politicians to “restrain the Irish” to which he replied, “I have not the power, you must take care that they are not provoked.” Just to guarantee that Old St. Patrick’s Cathedral would not be harmed, Archbishop Hughes requested the Ancient Order of Hibernians to arm themselves and surround the cathedral: 1﻿,500 men gladly responded to his request. Hughes’ strong leadership and tough public statements ensured that no harm came to New York churches. The same could not be said for Philadelphia where numerous churches were burned and a number of Catholics killed by rioting mobs of “Know Nothings.” Bishop Francis Kenrick of Philadelphia had told the city’s Catholics to “endure the persecution patiently, make no response and offer no defense or resistance.” [Florence Cohalan, A Popular History of the Archdiocese of New York. (Yonkers, N.Y.: United States Historical Society, 1983), pg. 56.]

We do, of course, continue to remember those Catholics being persecuted by Muslim terrorists in our prayers. Cardinal Ranjith has issued the warning that Catholics will not just lie in wait for terrorist attacks, but rather will, as a matter of self defense, protect their families and churches from persecution.

The Final Verdict on Archbishop Sheen Going to Peoria 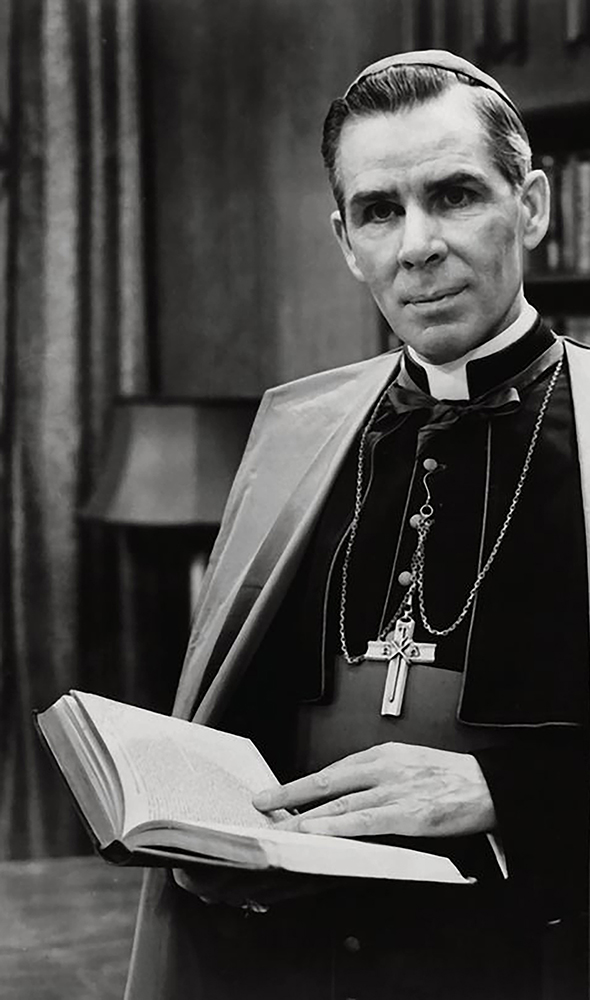 As reported in these pages in the last issue of The Angelus, a New York Superior Court found that the remains of Archbishop Fulton Sheen should be allowed to be moved to Peoria, Illinois as the Archdiocese of New York had failed to produce sufficient evidence that the transfer should not occur. In early May, the New York State Court of Appeals ruled in favor of Archbishop Sheen’s niece Joan Sheen Cunningham that the Archbishop’s mortal remains should be transferred to the Diocese of Peoria. This should, in all likelihood, be the final word on the matter since New York State’s highest court has made its ruling.

The Vicar General for the Diocese of Peoria, Monsignor James Kruse, issued the following statement after the Appeals Court verdict was made public: “After almost three years of litigation, the New York Archdiocese’s legal arguments have now been rejected at all three levels of the New York state court system. Although the New York Archdiocese may technically have legal options remaining, they are contrary to the wishes of Archbishop Sheen and his family, and would serve no genuine purpose except to delay the eventual transfer of Archbishop Sheen’s remains. We call on the Archdiocese of New York to end its litigious endeavors and to cooperate with the efforts of the Sheen family and Diocese of Peoria in celebrating the beatification of The Venerable Servant of God hopefully in this 100th year anniversary of his ordination to the priesthood.”

Burgos Will Celebrate Its Jubilee

Pope Francis has granted the Cathedral of Santa Maria de Burgos (Spain) the celebration of a jubilee year on the occasion of the eighth centenary of the laying of the foundation stone of the building.

The prelate also said that he would soon be presenting to the Vatican a detailed program of the celebrations that will take place during the jubilee that should see the center of Burgos transformed into a pilgrimage center.

From an original Gothic style that incorporates the canons of Spanish decorative art, the cathedral—the fruit of three centuries of work—is grand. Under the starry sky at the crossroads of the transept is the tomb of El Cid and Jimena, his wife. Burgos is a high place of pilgrimage to Santiago de Compostela, on the French Highway.

Jesuit Fr. James Schall, the longtime editor of the Homiletic and Pastoral Review, died on April 17, 2019. Fr. Schall spent many years faithfully defending the Church’s teaching on contraception at a time when there was rampant dissent among most moral theologians on the issue. For many years he was a professor at Georgetown University in Washington, D.C.

An obituary written by the Catholic News Service stated the following: “Fr. Schall was ‘one of the great treasures of American Catholic academics,’ a writer for Catholic News Service once wrote in reviewing two of his more than 30 books: ﻿The Sum Total of Human Happiness﻿ and ﻿The Life of the Mind: On the Joys and Travails of Thinking,﻿ published in 2006.

“﻿ ‘Throughout his career, Fr. Schall has been a champion of the traditional liberal arts education, with much of his work dedicated to remedying the gaps in college-level curricula that can leave even the most impressively credentialed among us strangers to history’s greatest intellects,﻿’ the reviewer said. Besides his books, Fr. Schall edited or co-edited eight other volumes, wrote several pamphlets and authored essays that appeared in numerous publications, including the St. Austin Review, Homiletic and Pastoral Review, and the National Review.

“Among the sources for many of the priest’s lectures were Scripture, Aristotle, Plato, Cicero, St. Augustine, St. Thomas Aquinas, G.K. Chesterton, and Pope Benedict XVI. He strongly supported the pope’s critique of Western culture which categorizes it as a ‘dictatorship of relativism.’﻿ ‘We are living in a time where the logic of disorder is at work, rejecting systematically the logic of being a human being,’ Fr. Schall once wrote. Fr. Schall was considered an expert on Chesterton; the priest edited two volumes of Chesterton’s collected works and wrote his own volume of essays on the famous Catholic convert.”

May he rest in peace. 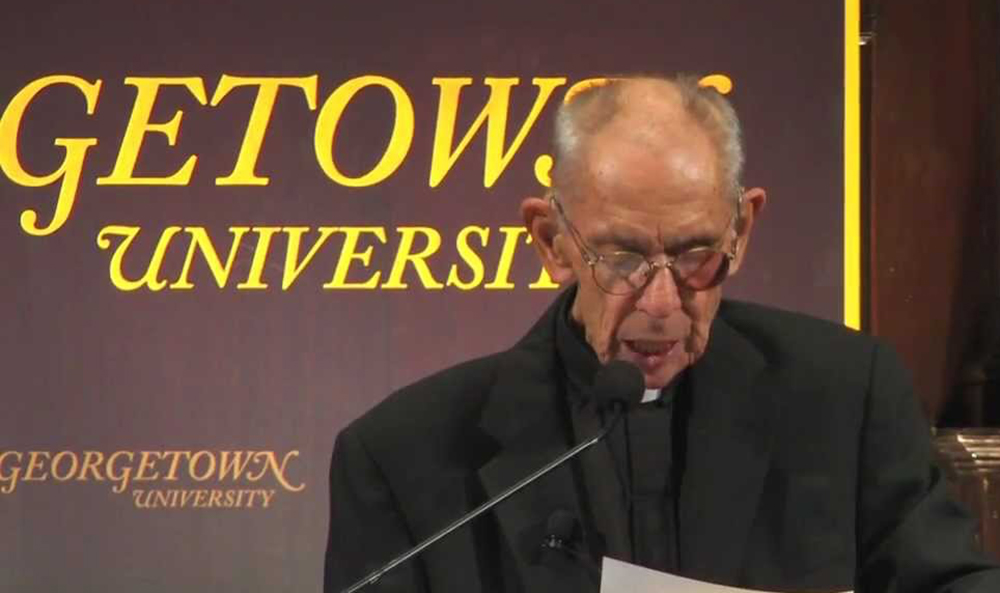 Fr. James Schall delivering his last lecture “The Final Gladness” at Georgetown before retiring in 2012. The lecture itself may be found here.