In a single and tragic day the temple of the light, known as Notre Dame, evaporated like smoke into the fiery air. Her sacred roof was devoured by an odious blaze which burned and billowed like a monster amidst the throes of death. Profaned by these furious and chaotic flames the millenary roof of this Lady of Stone was ripped away causing her spire to fall and her ancient vaults to lie broken. The 15th of April, Holy Monday, was the day when, during the night, the light disappeared and was drowned in a field of shadow.

Faced with this sad spectacle, modern man could only hold up his camera to capture the image of this edifice in agony. He tweeted it; he liked it; but all he shared was his confusion. He sent his ethereal messages—a mere second of emotion facing a dying eternity. Others, already sons of Hell, spread their hatred or indifference, jibing the sacred which was in flame: these are the sons of the Pharisees who mocked Christ upon the Cross. But those who cried, who sighed, or even those who sneered, all contemplated the vast grave silhouette of the great Lady of Stone who emerged from the torment of fire, somewhat stunned but standing still amid this Dante-like dance among the deformed shadows. But the man of 2019, does he really know what it is that he sees? Or does he merely gaze while grasping nothing?

Because he who looks without truly seeing doesn’t understand that it is beauty that draws itself away from the city of art; it is twilight of the now banished light of Paris; it is God Himself who is going away, God who is leaving France—His ungrateful daughter who has so denied Him. 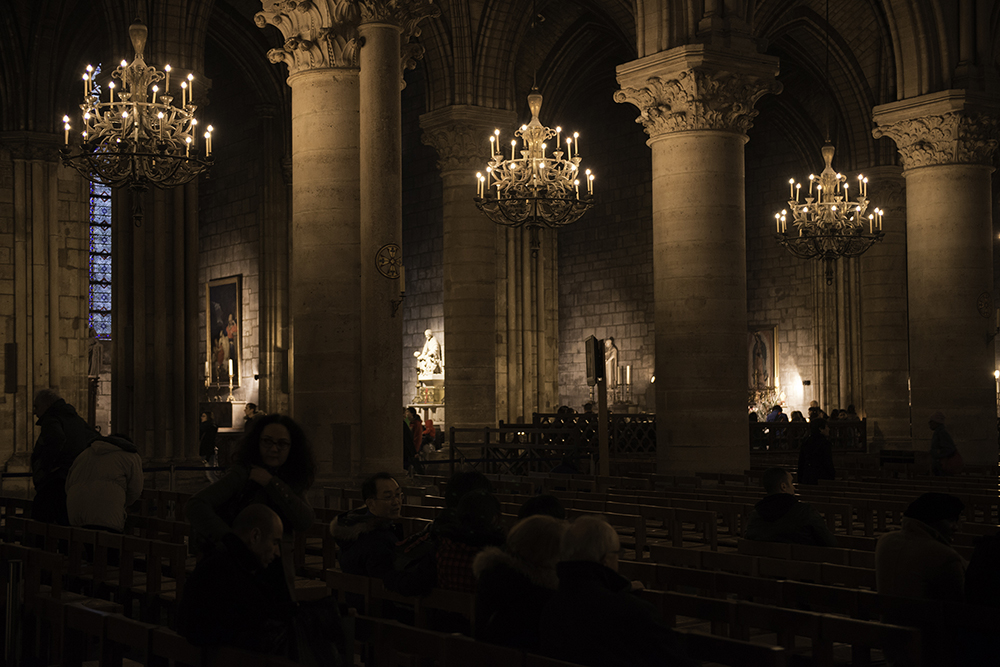 A Premonition to Visit

A few weeks ago, I had the chance (or the premonition) to go visit the cathedral. With my spouse, we stayed seated for several minutes below the high roof, between the walls kissed by light. Then, at the back in the chapel where one hides God, we recited our rosary behind a pillar under the gaze of the windows of a thousand faces. These people tell the story of a nation of builders; they tell of the hunt of St. Hubert, the harvest, or the martyrs of the first centuries. What splendor! Does one realize what this cathedral envelops between its walls? The Gothic cathedral, the French geniuses of their times who loved God; it is the temple of truth, of light given to men, of Revelation that nourishes our intelligences, of charity that transcends our will, of grace that penetrates the depths of our hearts. The Word of God was made flesh and the Faith was made stone. The cathedral is the temple constructed by free men, from the rural lands and from all over the nation in order to build its high walls, to open its immense bays on the colorful perfumes of paradise to touch the heavens with its towers. The cathedral is a catechism in stone; it is the Church who sees and who teaches.

The cathedral is Heaven opened upon the earth; it is the chest of a thousand colors, scintillating with all of its fire, protecting within its womb the miracle of religion. If God died upon wood, He is resurrected in stone and this stone came from the entrails of the earth, formed at the dawn of time. It is the stone of the altar; it is the eternal stone that carries the Holy Sacrifice. The French, out of love for God, dug up the earth to extract the stones coming from the foundation of ages. They carved them and mounted them upon pillars, designed the audacious arches, invented the flying buttresses that carry the sanctuary, sculpted the faces, signed the keys of the vaults that join the sweet section for the faithful like a long coat, like the hand of God protecting His children, powerful but light, kind but full of audacity. The pillars of the cathedral carry the earth itself, their aisles navigate in the sky, their windows capture the light and make it glitter upon the walls, they elevate its heart in a thousand colors, as religion and grace make the perfume of God and the saints rain into the souls of the baptized. 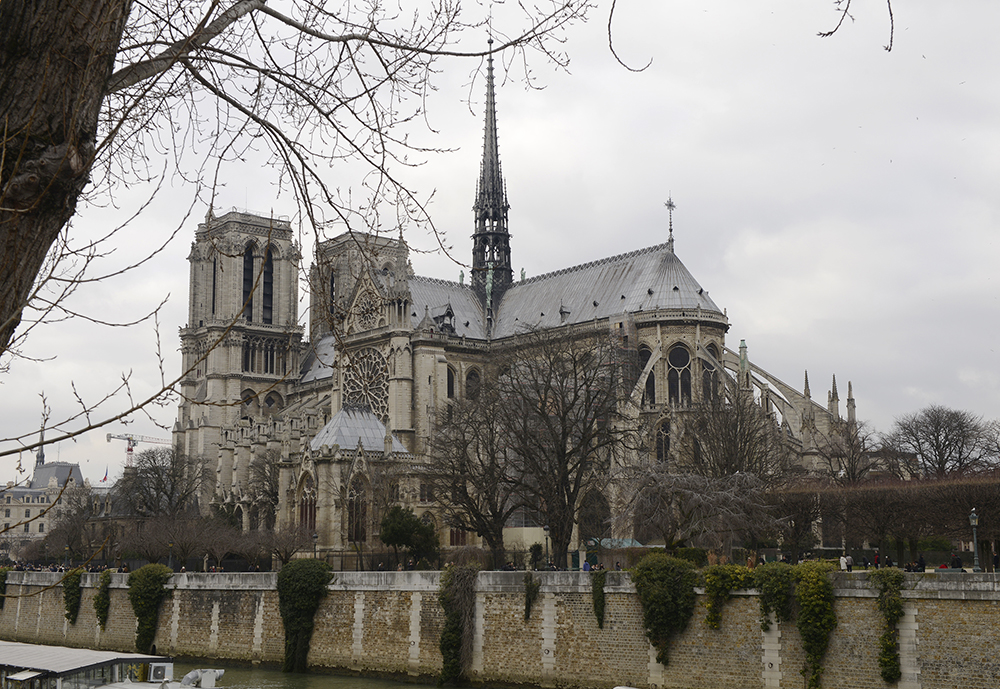 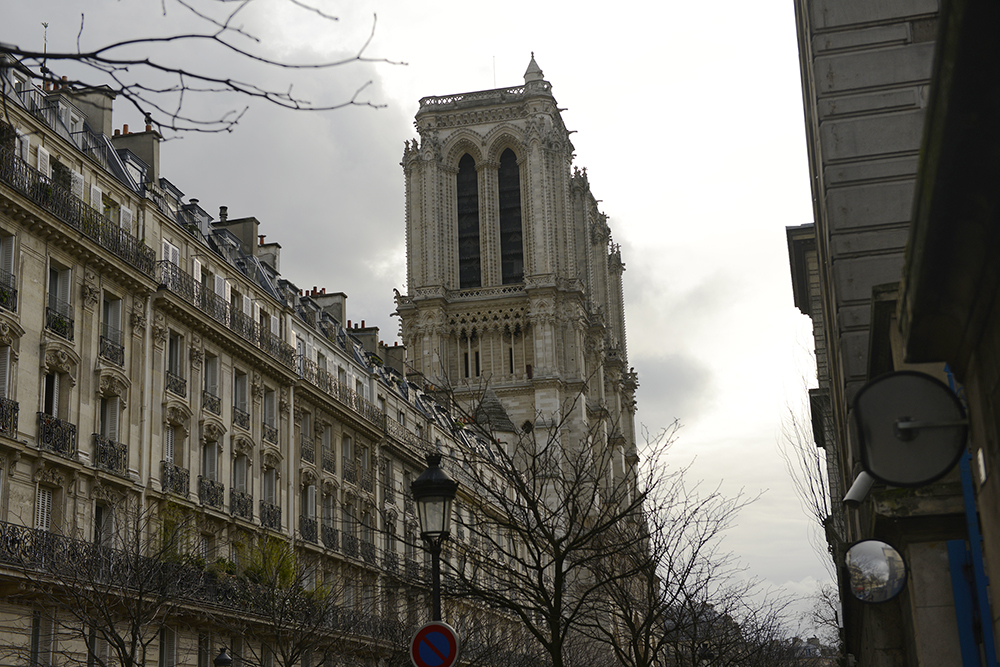 The cathedral cannot be anything other than Catholic. It is universal because that which it tells is the truth itself. It carries eternity under its roof; it is the dwelling place of God. But the roof is melted up to the location of the transept—there where the two arms of the cross join, at the level of the heart of Christ—there where the lance transpierced the divine victim and made blood and water, love and grace run upon the earth. Christian transcendence in its entirety is contained in the lines of the Cross: a vertical line planted in the earth and pointed toward Heaven, a horizontal line to lovingly embrace humanity. The cross of the cathedral is this: from the Orient to the Occident, from the rising of the sun until it sets, from the beginning until the end of time, it is eternity designed upon earth. But eternity is gone; death took it away. Night has beaten upon the city of lights and the man of 2019 has shed his tear. He shares his “emotion,” and he reassures himself by telling himself that he is not the only one to cry, that he is in communion with all men, because the cathedral is the temple of all, the temple of art and history.

The bishop rejoiced when the grand Rabbi of Paris himself witnessed with his own emotion, then he spoke of mankind, of the symbol that represents the grand Lady of Stone in the universal imagination. Then, he gave an accolade to the president in order to thank him for his will to rebuild the cathedral. All of these words were empty. They were full of emotion, but empty of sense, empty of truth. Eight hundred years ago, rural areas raised and built churches of stone while chanting the psalms. Today, in 2019, rural areas don’t pray anymore but despair, the cities damage and damn themselves in the incessant noise and deafening of their screens. Eight hundred years ago, the French who loved God raised the bell towers of stone in honor of God. Today, the French who have forgotten God drown their souls while those among them profane the churches of stone.

Man of 2019, do you see how you are far from your ancestors? How were you able to forget until now? One does not rebuild a cathedral like one builds a bridge! The cathedral is not the temple of men; it is the temple of God! It is the image of His eternal glory; it is the symbol of His grandeur, it witnesses the truth who was made flesh; it is in the shape of the gibbet that saved humanity; it is dedicated to the Mother of God, the pure Virgin; it is the driving force of the faith of a nation. It is not a museum, a stage set, a store, an expense item for the State budget, a photography subject, an unavoidable tourist attraction, no! It is the temple of God! It is the standard of the truth of salvation! The men who built it knew this because they loved God. And that which they built is eternal and will never die. Behold our hope: in building a temple of stone, the French who loved God saved their souls, confirmed a nation forever, and this nation is that of Heaven. Thus, God can give to the men of 2019 the grace to see the truth. Then God will come back to dwell in Paris, then beauty will once again find its colors in its diadem of stone, then Paris will heal its wound and find, again, its light.

Let us pray to the Blessed Virgin that France finds the faith in its ancestors who loved God. And you, man of 2019 who will rebuild, may you find the strength in this project to rebuild your heart, then can we rebuild the grand lady of stone! But perhaps that is what is happening…we have seen the people praying on their knees before the great blaze. A glow of hope. Like the glow that was filtered through the great rose window this morning, the 16th of April. It still shines, it still continues to distill its sweet light that comes to rest itself on the rubble like a healing balm. O thou, grand Lady of Stone, be reborn from your ashes!

A fire ravaged Notre-Dame cathedral in Paris in April and left a scarred skyline that one of the French capital’s most iconic structures had graced for centuries. Gone is the cathedral’s soaring, delicate 300-foot spire, which collapsed in the flames. The cathedral’s wooden roof is now blackened and charred.