Making the Home a Church Out East: On the Icon Corner

On the Icon Corner

“The Sunday of Orthodoxy,” that is, the First Sunday of Great Lent in the Byzantine Rite celebrates the triumph of the Seventh Ecumenical Council over the heresy of iconoclasm. Unlike the Christian West, the East had been ravaged for over a century by theological, practical, and political disputes over the use of icons in divine worship. With the ascension of Leo III to the Eastern Rome throne in 730 AD, the iconoclast movement spread throughout the Byzantine Empire, inspired both by genuine concerns over uninformed popular worship of images and a series of natural disasters seen as God’s punishment for idolatry in the Empire. While the Second Council of Nicaea held in 786-87, otherwise known as the Seventh Ecumenical Council, vindicated the veneration (not worship) of icons, it was not until 843 that icons were generally restored to churches, public places, and private homes.

Today, it is all but impossible to travel to historically Christian areas in Eastern Europe, the Mediterranean, and the Middle East without finding icons of Christ, the Blessed Virgin Mary, and innumerable saints adorning public and private spaces alike. In churches that use the Byzantine Rite, whether Catholic or Orthodox, screens or walls known as iconostases are erected in front of the altar area. Moreover, many of these churches feature numerous frescoes depicting Old Testament events, Our Lord’s earthly ministry, and important points of ecclesiastical history. Icons are so inextricably bound-up with the Eastern Christian conception of what a church is that making their homes into little churches, that is, spaces where the Faith can continue to be lived in full is inconceivable without icons.

Even before the era where digital printing and reproduction methods made icons widely available at a relatively low price, a veritable cottage industry of icon production sprung up in Eastern Christian lands to meet the demands of the faithful. After the arrival of Christianity in Kyivan-Rus’ (modern-day Ukraine and Belarus) in or around 988 AD, it became increasingly common for Slavic Christians in the area to designate a corner of their homes for the family icon, often of Our Lord or His Mother holding the infant Jesus. Even without widespread literacy or the dissemination of books, these icon corners were where simple family prayers would be recited and devotions such as the Sign of the Cross and repetition of the Jesus Prayer (“Lord Jesus Christ, Son of God, have mercy on me, a sinner”) would be made.

Prior to the Russian ritual reforms instituted by Patriarch Nikon of Moscow in 1666, Russian Christians would perform a pious rite of entering and exiting a home by facing the icon corner and performing a series of prayers and prostrations. While this extensive devotion has all but disappeared, Eastern Christians continue to cross themselves whenever they pass an icon, whether in church, the home, or even on the street. In Greece, for example, roadside icon stands ﻿are met with the Sign of the Cross from drivers hoping that the saint they depict, be it St. Nicholas the Wonderworker or St. George the Martyr, see them safely to their destination.

The “Home Church” in Eastern Christianity

Since the rise of Islam in the second-half of the first millennium, Eastern Christians have experienced waves of persecution that often prevented them from practicing their Faith in public. While periods of toleration did exist, shifts in political conditions and religious ideology within the Islamic world could result in Christians enduring new rounds of violence. Due to the intrinsically iconoclastic nature of Islam, it was not uncommon for Christian churches to have their icons defaced and/or be converted into mosques. The most infamous example is that of the great church of Constantinople, Hagia Sophia (“Holy Wisdom”), which became a mosque for 500 years before secular sensibilities led to it being turned into a museum. 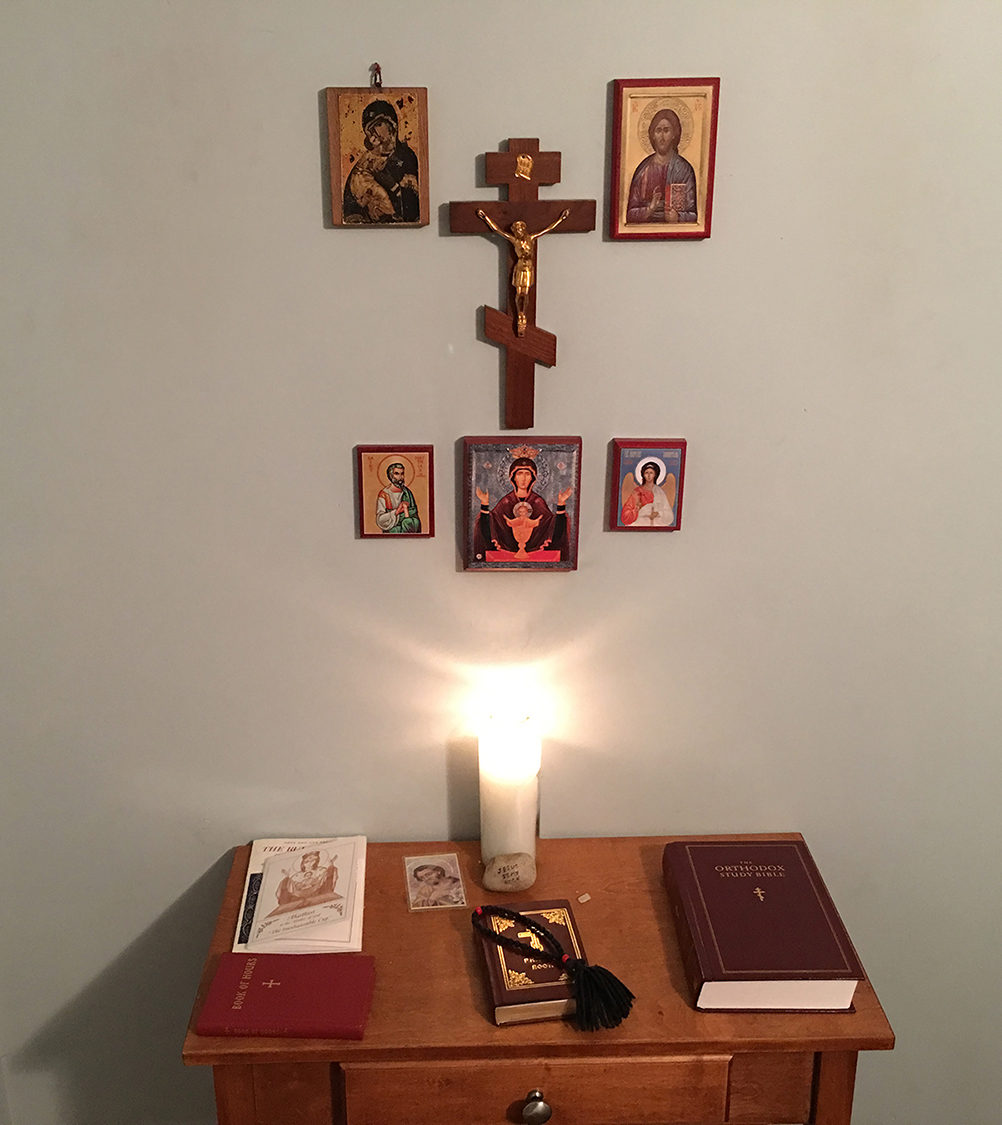 Anti-Christian persecution took on an intensified form in the 20th Century with the growth of atheistic communism in Eastern Europe. Greek Catholics, that is Eastern Christians in communion with Rome who use the Byzantine Rite, were especially targeted by communist regimes. Their churches were closed, their religious iconography and liturgical adornments were either seized or destroyed, and Greek Catholicism was outlawed. This situation led to the birth of the so-called “underground church” in places such as Ukraine where private homes became centers of Catholic worship rather than formal church buildings. Like their persecuted brethren in the Middle East, many Eastern Christian families relied on their icon corners as sources of consolation and catalysts for devotion.

Although there is no fixed “rule” for how an icon corner should be established, it is commonplace to select a corner of the home facing east. Why? Because according to Byzantine architectural norms, church buildings are to be constructed with the iconostasis and altar fixed so the congregation and clergy face east during all worship services. With the icon corner established to the east, faithful Christians praying in their homes can mirror the direction and form of worship normative in the Byzantine Rite. Moreover, the east also holds a place of special significance in salvation history as attested in Holy Scripture:

“And the Lord God planted a garden eastward in Eden; and there he put the man whom he had formed” (Gen. 2:8).

“O Jerusalem, look about thee toward the east, and behold the joy that cometh unto thee from God” (Bar. 4:36).

“Moreover the spirit lifted me up, and brought me unto the east gate of the Lord’s house, which looketh eastward” (Ez. 11:1).

“For as the lightning cometh out of the east, and shineth even unto the west; so shall also the coming of the Son of man be” (Mt. 24:27).

As for the structure of the icon corner, many will install a shelf on which at least an icon of Our Lord and His Most Pure Mother rests. While it is praiseworthy for a Christian home to have at least one hand-painted icon, this is not always practicable. Thankfully, cost-effective reproductions of some of Christian antiquity’s most famous icons are readily available, as are more recent iterations based on time-honored models. Whether placed on a shelf or affixed to wall, additional icons usually depict the baptismal saints of the family members. It is also common for families to keep icons of saints and festal days near and dear to them personally.

Once an icon corner has been established, many families will either burn votive candles in front of the icons during periods of prayer or, more traditionally, using a freestanding or hanging oil-burning lamp that is never extinguished. This “everlasting flame” and burning of oil serves as both a reminder of the eternal Light of Christ and as an offering of faith and love to God. Those families who have their icon corners blessed by a priest, often annually following the Feast of Theophany on January 6, will use the lamp oil as a sac﻿ramental to bless themselves following family prayers.

Not Just an Eastern Practice

Although the development and widespread use of icon corners is historically an Eastern Christian phenomenon, this devotion is not off limits to Western Christians, particularly Latin Catholics. Many traditional Latin Catholics, for instance, enthrone the Sacred Heart of Jesus in a designated place in their homes. While this enthronement may not be in an eastern corner of the home, it still serves as a focal point for Christian prayer and devotion in Catholic households. Accordingly, Latin Catholics can adorn this special place in their homes with icons to further aid them in prayer as they beseech Our Lord, the Blessed Virgin Mary, and all the saints for the heavenly graces necessary to attain salvation.

The purpose of icon corners is to assist in directing hearts and minds to God. They are an aid to prayer, not an end in themselves. Whether a family has one icon or a dozen, it matters not. What is most important is that the icon corner brings families together to give thanks to the Lord whose mercy endures forever. It is a place of gathering, of consolation, and joy. Even in times of hardship and persecution, icon corners serve as a spiritual gateway to numerous graces and a reminder that even in the darkest times, Christ has not abandoned us. 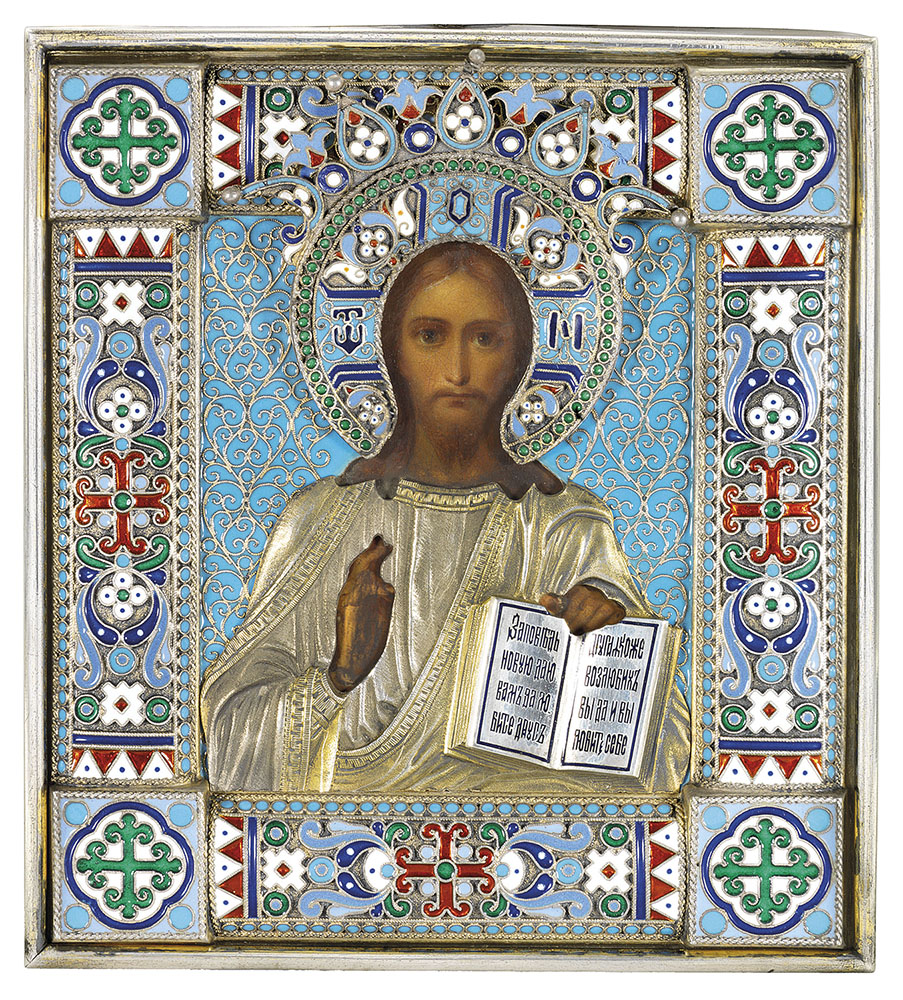