Although he is today a saint and one of the greatest Fathers of the Church, St. Augustine did not start out as such; in fact, he is one of the most famous converts in history. Officially a catechumen for some 30 years, it was only after a long and torturous development aided by God’s grace that the future Doctor of the Church was able to overcome his doubts and finally become a Catholic. About 10 years after his baptism on Easter of 387, Augustine wrote the story of his life from his birth in 354 to the death of his mother St. Monica in the autumn of 387. Written in Latin, the work is called Confessions, the first autobiography. As a prolonged medi﻿tation and prayer while recounting various chronological events, the work is a three-fold confession: a confession of praise of God, a confession of faith as it deals with his conversion, and a confession of his past sins. Since the saint reviews his life from the beginning, there are many lessons in the work for parents and the youth, lessons that are universally applicable to all. Augustine first wishes to praise God for His mercy, but he also explicitly states that he is telling about his sins so that “I and all who read my words may realize the depths from which we cry to you. Your ears will surely listen to the cry of a penitent heart.” While describing his youth, Augustine focuses on three basic categories that led him into danger: delay of baptism, poor educational methods, and bad companions.

The Path to Baptism

In Augustine’s time and place, baptism was commonly delayed; the thinking was that if the person was baptized, he might still fall into sin and be in a worse state than before. Enrolled as a catechumen by his mother when young, Augustine states that he was “blessed regularly from birth with the sign of the Cross and was seasoned with God’s salt.” While still a child, he was once so ill that he was nearly baptized but recovered before receiving the sacrament. His comment gives the typical thinking of the time: “So my washing in the waters of baptism was postponed, in the surmise that, if I continued to live, I should defile myself again with sin and, after baptism, the guilt of pollution would be greater and more dangerous.” As result, he continues his life out of the state of grace and with his sins still on his soul like the man who stays in his illness, refusing a cure for fear that he will get sick again. Understandably, Augustine later became an influential defender of infant baptism. It is also interesting that while the old moral theology manuals state that baptism cannot be delayed beyond a month or so without serious sin, in some places today, baptism is delayed for months or even years. Speaking of the sacraments, although there is only a glancing﻿ reference to Confirmation in Confessions, it is of note that while many think of it as a sacrament to be given to adolescents, moral theologians such as Fr. Heribert Jone write that Confirmation “should generally be received not long after attaining the use of reason.” Writing before the Second Vatican Council, Fr. Jone continues that “great stress should be laid upon the reception of this holy Sacrament by reason of the increased paganizing influence of our times.” At least in a large parish such as that of St. Mary’s, Kansas, Confirmation is often given to third-graders, precisely to give them as many graces as possible before facing the teenage years. Augustine, looking back on his youth, advises families to use every spiritual means at their disposal to cleanse the soul and keep it healthy: “and once my soul has received its salvation, its safety should be left in your keeping, since its salvation has come from you.”

Another danger Augustine describes involves the educational methods and goals of his day. Raised in North Africa before the collapse of the Roman Empire, paganism still had a strong hold on the area. As his native language was Punic, Augustine look lessons in Latin—which he enjoyed—and Greek—which he did not. He criticizes his teachers, however, because after learning grammar, instruction turned to literature, especially the greatest poem in Latin, Virgil’s Aeneid, which was taught without a regard for objective truth. Although in The City of God, Augustine praises Virgil as “this most famous and approved of all the poets,” he notes that as ﻿a boy the focus was on memorizing Aeneas’ voyages and lamenting “the death of Dido, who killed herself for love.” The point is not that Catholics should stop reading literature, pagan or otherwise; Augustine is no advocate for ignorance disguised as a false purity. Rather, the whole purpose of education is to cultivate in the soul a love for the truth and so everything should be taught with this aim in mind. The reading of any work should be with an eye toward supernatural realities; as Augustine puts it later in Confessions “verses and poems can provide real food for thought.” Among the Fathers of the Church, the greatest apologia for literature is the famous letter of St. Basil the Great to his nephews in which he writes that Catholics “must be conversant with poets, with historians, with orators, indeed with all men who may further our soul’s salvation.” To present false as true or good as evil is the real problem: the distinctions above help to account for Augustine’s remarks on Virgil as well as the saint’s criticism of the sensual and pagan theater of his day. The putative goal of Augustine’s early education also draws his criticism. As is common still today, parents and teachers in the fourth century were much more concerned about the student’s ability to be materially successful than to grow in virtue. In Confessions the point is made as Augustine learns rhetoric: “A man who has learnt the traditional rules of pronunciation, or teaches them to others, gives greater scandal if he breaks them…than if he breaks your rules and hates another human.” Later Augustine criticizes his father Patricius who worked hard to provide the means for his son to go to school but “took no trouble at all to see how I was growing in [God’s] sight or whether I was chaste or not.” To put it in other Augustinian terms, one’s education can either focus on the world and pull one down or inculcate love for the higher things, helping one to ascend. 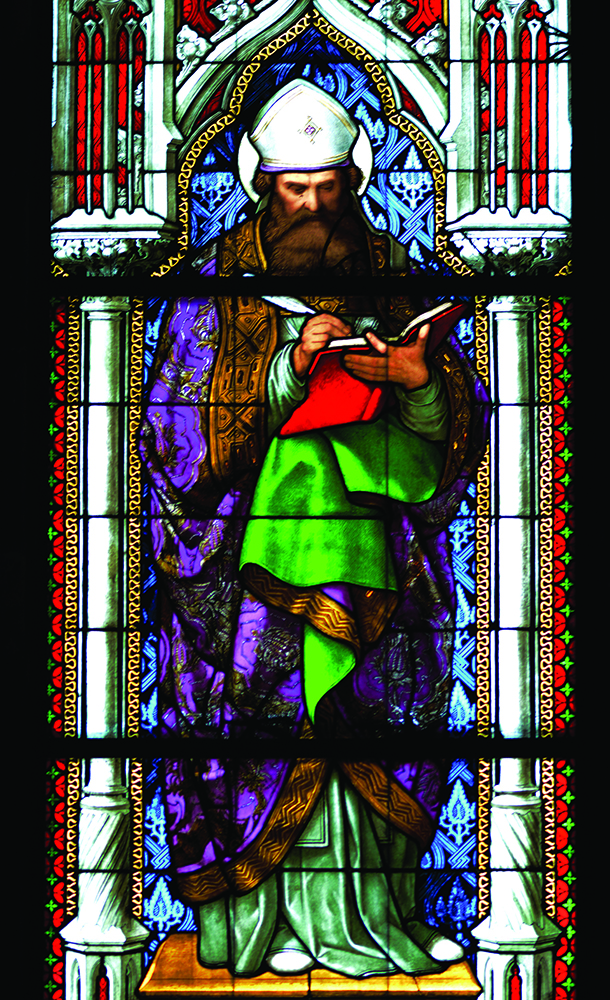 St. Augustine was born at Tagaste, on November 13, 354. Tagaste, about 60 miles from Bona (ancient Hippo-Regius), was a small free city of proconsular Numidia which had converted from Donatism. Although respectable, his family was not rich, and his father, Patricius, one of the curiales of the city, was still a pagan. However, the admirable virtues that made Monica the ideal of Christian mothers at length brought her husband the grace of baptism and of a holy death, about the year 371.
Stained-glass window, Cathedral of Cologne, Germany

The Peril of Bad Companions

Perhaps even more influential than the schoolroom, however, are one’s friends; the third danger Augustine identifies from his youth are bad companions that led him into vice. St. John Bosco famously told his boys to “fly from bad companions as from the bite of a poisonous snake.” As with so many things in his life Augustine learned this lesson the hard way, experiencing what we would today call peer pressure: “among my companions I was ashamed to be less dissolute than they were. For I heard them bragging of their depravity, and the greater the sin the more they gloried in it, so that I took pleasure in the same vices not only for the enjoyment of what I did, but also for the applause I won.” He confesses that “I used to pretend that I had done things I had not done at all, because I was afraid that innocence would be taken for cowardice and chastity for weakness.” This admission leads Augustine to tell the famous story of how he stole pears from an orchard for the pleasure of “the crime itself, from the thrill of having partners in sin.” Admitting that he had “wandered away…and created of myself a barren waste,” Augustine goes on in Carthage, “a hissing cauldron of lust,” to take a mistress, have a child out of wedlock, and spend the next 15 years struggling to find and accept the truth. While he celebrates, along with many others, the joys of friendship as a “delightful bond, uniting many souls into one”—and indeed goes on to describe some close and holy friendships—the false friends of his youth represent “friendship of a mostly unfriendly sort,” for such love is a disordered one, the Augustinian definition of sin itself.

While recounting these falls, the consoling truth of God’s mercy is never far from the future saint’s mind. Not only does God prevent him from being worse than he was, but also Providence is continuously working to lure his soul back to Him. Looking back on his life, Augustine can see how the Good Lord shaped events to help him overcome his previous falls: “You follow close behind the fugitive and recall us to yourself in ways we cannot understand.” Various evils are used by Providence to put Augustine in the path of true friends, such as when his unruly students in Rome lead him to go to Milan and meet St. Ambrose. Appropriately, Augustine ends the biographical part of Confessions by praising his mother, St. Monica, who never ceased to pray and sacrifice for her son until he converted. While doing our best to defend our children from the various dangers that can have a lifelong impact, the example of St. Monica is, of course, another aspect of parental duty. The strength of families is in the grace of God, through the sacraments and through the intercession of parents; as St. Augustine says of his mother: “In the flesh she brought me to birth in this world: in her heart she brought to me birth in your eternal light.” May it be that all parents and children “will be [St. Monica and Augustine’s] fellow citizens in the eternal Jerusalem for which [God’s] people sigh throughout their pilgrimage.”