Peering down from dizzying heights, these stone monsters have stared so for centuries. And not peering only, but pouring out profusely from their bowels, it seems, onto the paving below. They are known as gargoyles, from an old French word “gargouille,” meaning “throat.” They ascended their lofty perches during the rise of Gothic architecture in France and became a feature of the Gothic style as it spread throughout Europe. The gargoyle is essentially functional, channeling rainwater from towering roofs and away from the walls of churches. They are in fact the medieval form of a downspout. The medievals did not invent the idea but rather improved it. Today, remnants of ancient Greek structures1 have monstrous lion heads ranked as a form of gutter, performing the same function though not as effectively or spectacularly as their medieval descendants. Greek marble walls still show their unfortunate water stains. The medievals were not as ignorant of classical times as many think and took the idea, projecting their creations further from the walls. This feature also lent itself humorously to decorative embellishment. What one sees today of the gargoyle is actually only half its length, the rest buried in the wall counterbalancing the great weight of stone, sometimes at least ten feet in length. 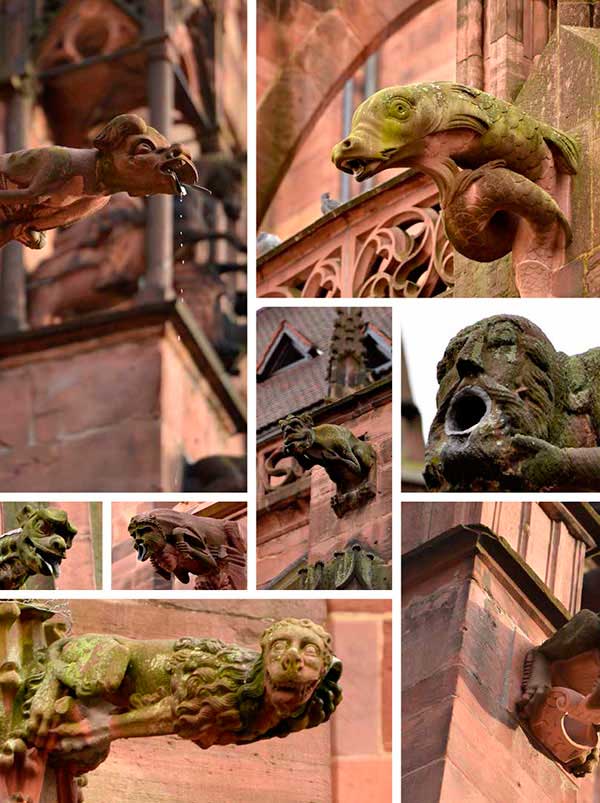 But why monsters and fantastic creatures? The symbolism could be in the water, expelled by these demons and chimeras, as forces of evil being directed away from the church. Some attribute the gargoyles to represent those banished from heaven, where there is “weeping and gnashing of teeth.” A church is, after all, the “Janua Coeli” (Gate of Heaven), the “antechamber” to Heaven. But according to the French Catholic historian, Emile Male, the stone-carvers had complete freedom to personify these functional elements according to their fancy.2 What we see is the result of vivid and playful imagination and not something specifically theological or even intentionally symbolic. These medieval monsters of yesterday are rather comical and tame in comparison to the creations of our own age, where ugliness is preferred to beauty and horror reveled in for pleasure.

1 The Tower of the Winds in Athens.